Geography and history intersect in interesting and significant ways in Central New York, creating a fascinating area for exploration and outdoor recreation. The scenic hill country that creates an amphitheater-like setting for Lebanon Reservoir, is only the beginning of the story. For engineers in the early 1800s, the streams draining these hills, offered an opportunity to develop storage for a new waterway corridor, the Chenango Canal, in the valley below. The Chenango Canal, which opened in May 1837, connected 18 communities along its 87-mile length from Utica to Binghamton. The Chenango was one of several lateral canals that connected with the Erie Canal that opened in 1825 and offered a settlement gateway to the interior of the State of New York. 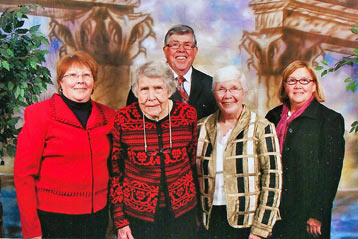 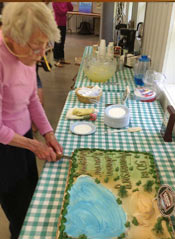 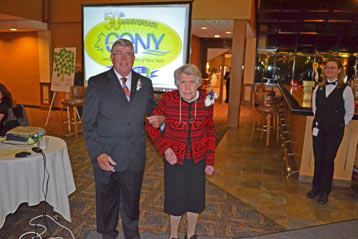 The Chenango Canal served as the lifeblood for the nearby communities of Hamilton, Earlville, and Sherburne. Freight rates for coal from Pennsylvania, for example, dropped from $1.25 a ton to 25 cents a ton with the coming of the Canal. The waterway was never profitable as maintenance costs for the upkeep of the many locks was high and soon competition with railroads undercut traffic. The Canal closed in 1878 and today the reservoirs, still owned and maintained by the State of New York, remain a major legacy of the era, These reservoirs are now primarily used for fishing, recreation, and summer home sites. Many stone houses in the area were built by mason artisans brought to the area to construct the locks and bridges for the Canal. Several sections of the Canal remain visible, and several portions still hold water. Remnants of locks also remain. Hiking trails on former towpaths can be found in the vicinity of Hamilton and Bouckville where the Chenango Canal Association operates a tourist visitor center on the banks of the Canal.
The Hartshorn family that developed and currently manages Lebanon Reservoir Campground also has deep roots in the area, tracing its ancestory to the late 1700s when the first European settlers moved here from Connecticut. Hartshorn descendants of these early settlers became prominent farmers and in the twentieth century leaders in the dairy industry with their Holstein cattle.

Smith's Valley, as the region at the base of the hills was first known, took its name from Colonel William Smith (1755-1816). A Revolutionary War veteran, Smith married Abigail Adams, the daughter of President John Adams. The 24,400 acre land grant Colonel Smith received in Central New York as a reward for his distinguished service in the Revolutionary War, comprised six townships, three on the northern tier of Chenango County (Sherburne, Smyrna, and Otselic) and three adjacent towns on the southern tier of Madison County (Hamilton, Lebanon, and Georgetown). He received the patent for these areas in 1794. One of the districts, no. 5, the Town of Lebanon, dates to 1807. Smith lived in the Valley for a time and his brother Justus became the land agent to sell property.

As early as 1794, David Hartshorn arrived from Lisbon, Connecticut and established a farm on the Chenango River that later became part of the Town of Lebanon. By 1817, the name Smith's Valley became Randallsville when the first Post Office was established (named after the Postmaster-General at the time) and David's oldest son became the first postmaster. Many Hartshorn's are buried in the Smith's Valley Cemetery located on Armstrong Road, including Gailan Hartshorn, who founded Lebanon Reservoir Campground along with his wife, Carolyn Faucett Hartshorn in1963.

In 1814, Amos Kingsley III (1768-1847), a tavern keeper and ordained minister from Becket, Massachusetts, acting on an urge to move west, traveled to Hamilton on horseback. He learned that property was available in Smith's Valley and contacted the Smith family. The Smith's sold Kingsley the Colonel's large mansion and 250 acres where they settled the next year. Amos paid $40.00 per acre for the land and soon acquired more property to create a 700 acre estate. Behind the house on a stream, later named Kingsley Brook, he built a saw mill. This stream later became the namesake for Kingsley Brook Reservoir, now known as Lebanon Reservoir.
The Chenango Canal was built by the State of New York in 1834-1836 to assist commerce between Binghamton and Utica where it intersected with the Erie Canal. In order to provide an ample year-round water supply for the Canal, several reservoirs and an elaborate feeder system were needed. Kingsley Brook Reservoir (Lebanon Reservoir) was the southern most of these water impoundments. It is still maintained by the state of New York under the auspices of the Canal Corporation subsidiary of the Thruway Authority. 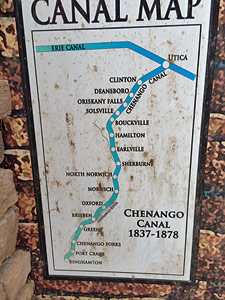 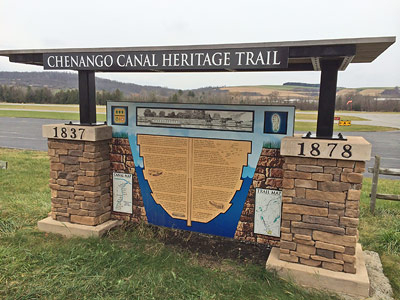 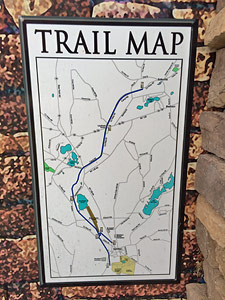 Avery Kingsley, the youngest son of Amos Kingsley ran the family farm when the Canal was constructed sued the State of New York for damages for the loss of the water in Kingsley Brook, but was unsuccessful. The dam of the Reservoir ruptured in 1843, creating a crisis downstream in the Chenango Valley. The rush of water and rocks down the 80 foot deep gorge along the 1.5 mile stretch between the Reservoir and the valley below, washed tons of debris onto the Kingsley farm fields. Later, a higher dam doubled the acreage of the Reservoir to its present size.

A direct family connection exists between the Hartshorn's and the Kingsley's. Ryal Hartshorn, born in Lisbon, Connecticut in 1789 and a veteran of the War of 1812, married Amos Kingsley's daughter, Maria, in Lebanon after moving here along with his brothers Ira and Oliver. Ryal is a fourth generation ancestor of the current proprietors of Lebanon Reservior Campground.

The upland hill property taken for Lebanon Reservoir where Kinglsey Brook was dammed, known as the Campbell settlement, belonged to nine Campbell brothers. A cemetery bearing the Campbell name on Geer Road provides a direct connection to the family. Carolyn Faucett Hartshorn is a direct descendant of the Campbell family and grew up in a home adjacent to the cemetery. The first wife of her grandfather, John M. Faucett, Alcie Campbell, provides the connection. Their farm land surrounded two-thirds of the shoreline of Lebanon Reservoir. This property then passed to John N. Faucett and his wife Alice Bills, parents of Carolyn Faucett Hartshorn. Carolyn grew up on the family farm and her father oversaw a boat rental business for fishermen on the Reservoir. This 300 acre property was sold for development by Carolyn's father, John, in 1955, and he continued to live on the family homestead through the 1960s.

The property that forms the backbone of Lebanon Reservoir Campground was also originally Campbell farm land and comprises the remainder of the Reservoir water frontage but it came to Carolyn from her mother's family, the Smith's and Bills'. Carolyn's mother, Alice Bills Faucett was raised on the farm that later became the campground by her mother, Mary Rose Smith Bills and grandparents George and Sarah Smith. The Smith's celebrated their Golden Wedding Anniversary on the farm in the 1900. Carolyn inherited the eighty acre property that became the campground in 1948 on the passing of her mother Alice.
The roots of the current campground date back to the late 1940s when Carolyn Hartshorn and her husband Gailan began clearing the long-neglected and overgrown farmland for cash crops. The main Hartshorn dairy farm, Lamaga Stock Farm, was three miles away just outside the hamlet of Lebanon where the Hartshorns raised their family. The farm was known for its outstanding herd of registered Holstein cattle. Son Truman, and daughters Mary Karen, Louise, and Lois, grew up in Lebanon and assisted at the farm.

By 1954, a picnic grounds was established on the shores of Lebanon Reservoir, which continued to expand into the next decade. A bathroom facility followed as well as a pole barn for storage in 1959, later converted into a game room and recreation pavilion. An old pea picker two-room cabin located on the property was moved to its current location in 1954 (now the campground office and a residence, receiving major additions and renovations in 1955, 1971, and 2001).

The first campers arrived in 1963 and Gailan and Carolyn became founding charter members of the Campground Owners of New York (CONY) association. Several landscaped terraces following the contours of the land overlooking the Reservoir were laid out in the late 1960s and camping rapidly expanded. A second pavilion was built in the mid-1960s along with bathroom and shower facilities. More full-hookup sites were added in the 1970s and the first seasonal campers arrived, with families staying several decades. The number of terraces increased to nine and each was named alphabetically for a tree, using the letters A to L: Aspen, Beech, Cedar, Dogwood, Elder, Fir, Hemlock, Juniper, and Linden. Other campsite areas took their names from their setting: Orchard, Ridge, and Bluff. Before the campsites were lengthened and upgraded to accommodate larger units and improved wiring and water service in the 1980s and 1990s, the campground offered over 150 sites, but the number later dropped to 135 as RV units required more space.

In recent years emphasis has been placed on updating facilities and the infrastructure. A bathroom facility was completed in 2008, driveway paving in 2009, and a new septic facility in 2010. An updated website provided improved exposure for the business in 2011, online reservations were offered for the first time, and kayak rentals debuted. A mini-golf facility opened in 2012. The activities program greatly expanded again in 2013 with the addition of a mine sluice, dunk tank, and bounce house. In 2014, a new bathroom facility, and the first rental cabins opened.

Marketing efforts have also accelerated as the Campground expanded its advertising outreach and RV show presence by hosting a booth at the Central NY RV show in Syracuse in March 2011. Campground hiking trails as well as the two-mile corridor around the Reservoir remain popular for exercise and nature walks. Swimming in the Reservoir, fishing, and boating all offer great opportunities for family recreation while camping. Daily, weekly, monthly, and seasonal rates are available. Seasonal campers now occupy about one-half of the campsites. Planned activities remain popular, including the long-running Campers Christmas weekend in late July.
Lebanon Reservoir Campground is now managed by the second generation of the Hartshorn family, including son Truman and his sisters, Mary Karen, Louise, and Lois. Mary Karen's son, Alan, also helps in the office and camp store on weekends. Mother Carolyn celebrated her 95th birthday on November 15, 2014 when over 100 family, friends, and campers gathered to mark the occasion. Shown below is Carolyn and Mary Karen cutting the cake as well as a photo of the Hartshorn family. 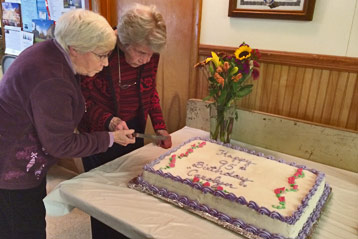 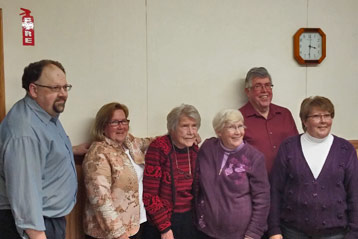 Truman Hartshorn, now retired from the Department of Geography at Georgia State University in Atlanta, spends full time at the Campground during the operating season along with sister Mary Karen. Lois lives year round on the property and keeps busy with a full time career in Norwich, serves on the Council for the Town of Lebanon, and is always busy at the Campground. Louise works full time in Rochester but can be found at Lebanon Reservoir every weekend during the summer. The popular third annual antique car show will be held in early August 2014.